This summer I taught the novel Watchmen, which amazes me with its narrative loops and movements through history. I found myself thinking about our experiences of time. I was also lucky enough to have some spare time to respond to articles and to practice some screen recording. I’ve been capturing performances on the screen and thinking about shifts in composing when inscription plays out in real time. I want to examine a few of the artifacts from one of those experiments.

There are a few ways that you can read this posting, and each has to do with time. If you’re pressed for time, you could just watch the first video below, which clocks in at one minute, six seconds (1:06). You could also read the prose on this page, which, at about 1000 words, would probably require about five minutes. Or you could take in the podcast and three related videos embedded below–for a total of twelve minutes and fifty-one seconds. And there are some hyperlinks: one to an article by Bruno Latour (2,800 words); two screencast videos (9:58) and (9:26); and a podcast (3:01), video (2:57), and portfolio (2300 words) by Tom Macarte. If you really want to explore, give yourself about an hour to work through all of these pieces. I want to argue that each of these possible paths suggests not merely different amounts or kinds of materials, but different modes of reading–and different possibilities for scholarship.

Let’s start with the quickest possible engagement, the video below.

Latour’s “Some Experiments in Art and Politics” discusses the qualities of roundness, flatness, edges, spheres. The piece plays with the shapes we might use to represent knowledge and the world. And the piece layers a larger metaphor over these figures: composing. Latour’s article prompted the video response above, “A Two Text Mashup.” 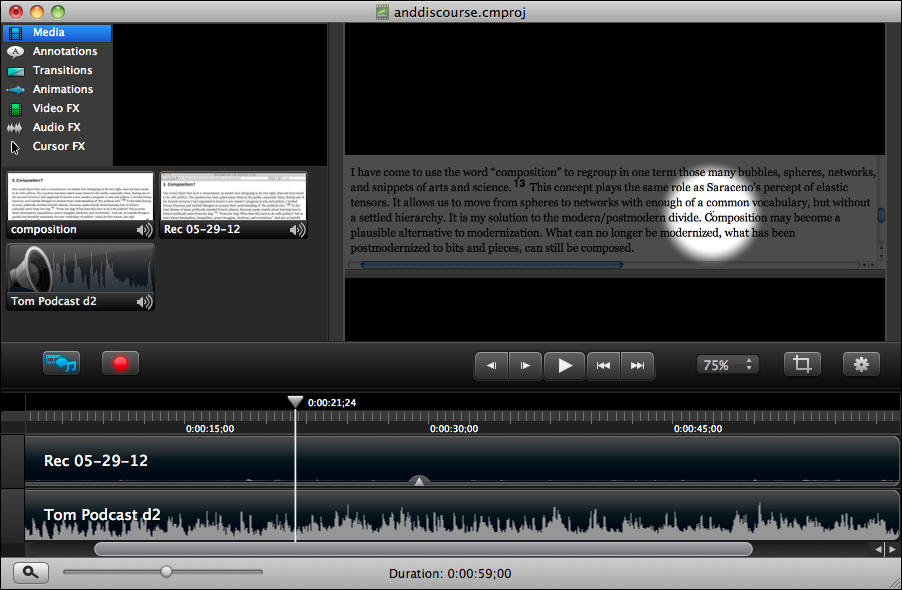 To make the video I recorded the screen several times, selecting and spotlighting passages of Latour’s article. I then combined the screen recording with a podcast made by Tom Macarte. I only used the first segment of Macarte’s audio file, so if you’re reading to explore the materials collected here, try the full mp3 file.

To better understand the project, it helps to look at the creation timestamps for the videos. At 1:42 PM, I saved the first recording of the mashup. I then spent sixteen minutes experimenting with adding materials–more text and two videos, one primarily meant to provide a second audio track.  At 1:58 PM, I saved a version called “Four Text Mashup.” At some point, I decided I preferred the two text version. I then made a works cited video and recorded it atop the two text mashup, saving the finished video at 2:17 PM. Including time spent before starting to record, I devoted about fifty minutes to creating the videos.

The four text mashup (below) in some ways represents a false start in the middle of the process, an abandoned attempt at composing with more layers. I was also recently lucky enough to talk a bit with Jody Shipka, who reminded me that these kinds of castoffs can be some of the most telling artifacts of composing.

One of the texts added to the four text mashup is “Bubble Track,” which appears in a video called “Truing.” In “Truing,” the bubble track plays with no sound, but is deeply wrought within the video and with sounds associated with the other elements in the piece, sounds that return (differently) when the volume of the bubble track is turned back up in the four text mashup.

Reusing the “Bubble Track” video in a different context opens a new way of reading “Truing.” There are flows of meaning across or among the artifacts, boundaries become fluid, bubble-like. Both videos are linked below if you have time to spend with them. (“Truing” is perhaps my favorite performance screencast.)

We might say the bubble track video materializes differently in each piece, helped by the human hand which moves the volume slider and gives the video sound in one instance and not in another. Compositions that reuse materials call for readings that account for these shifts across contexts and temporalities.

And if we zoom back in on the artifact, we encounter different senses of time. The (1:06) video that opens this posting really is a distillation of time and materials. Digital composites, when read, unfold sedimental layers of finished and unfinished composing, as the screencast below shows. If you watch the video, you will find yourself making decisions about commitment and time. There are segments where Macarte has left empty the canvas as he works out the composing of the audio. More than half the video, in fact, features leftover materials that never made it into the posted podcast, throwaway bits that ask a listener (here, a viewer) to wait while meaning subsides and anticipation builds, all represented visually with the playhead as it scrolls over the markers of sound and silence.

And, of course, we can zoom back out again to layers and connections that cross contexts of materials and time. As Macarte points out,

Lots of the loops are from songs that are sampled on the album [by P. J. Harvey]; this relates to my blog posting regarding samples functioning like epigraphs, layering another text, and its meanings and connotations, underneath the present text. To that end, I tried to layer the sampled parts under the readings of the lyrics from those songs (e.g., the first part is a reading from “Let England Shake,” under which I layer the loop from “Istanbul (Not Constantinople),” from which “Let England Shake’s” keyboard melody is derived).

A keyboard melody in one song evokes a second song which is then layered over a sample from a video of the first song. To read the piece, one must explore and find information elsewhere, here in a video where Macarte explains, “I can use my beatmaking skills to make an argument” and in reflections about his work. And I’m not just asking us to immerse ourselves in these materials to prove some academic point. I like spending time with them, getting lost in their connections and layers of meaning. In some ways, this is just accumulating, spending time with materials, and taking pictures with the screen. It’s a process that recasts our experiences with reading (and with time). It’s personal, self-referential, pleasurable. Surely that couldn’t qualify as scholarship. Could it?