Here’s what I remember.  The room yawned wide, windows along the back wall.  Three rows of seats, long tables pushed up against each other end to end.  It was Sunday morning, and we faced the presenters: Steven Hammer at a laptop, managing the computer and the mics, advancing the slides; Kyle Stedman, Jonathan Stone, and Harley Ferris sitting in chairs off to the side and standing to speak.  The front table was crowded with sound stuff: a record player, a console, what looked like a funnel made of tin foil standing up from the table like a flag, laptop computers, cords, records.  There was music playing when we entered the room – I’m not sure what it was.  It sounded old. 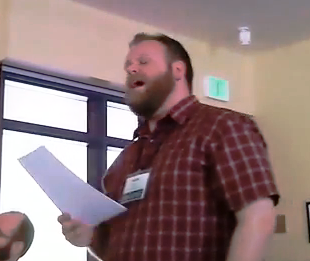 The  presentations were a collage of words, sounds, and reflections colliding into one another.  Kyle played Bach and some opera on a record player while talking about the ability to control sounds.  Steven told us about his glitch art display that kept glitching, about writing dirty new media and embracing chaos.  He said, only some glitches count.  Jon played us a recording of “Ol’ Rattler” picked  out on the piano using sheet music and the same archived song sung; the difference was striking.  Audience members pushed buttons, played records, and mingled sounds with Steven’s microphone noise, and I had the urge to cover my ears.  Harley sang “Stand by Me,” and we joined in while we watched images of the Civil Rights Movement pass by on the screen.  My heart was beating wildly during the singing.

Microphones in water glasses.  A record player.  Pounding the table.  The large projection screen at the front of the room.  Placing a sewing needle on a record, and a foil funnel pushing out the sound.  A red screen.  Bow Wow rapping.  Voices singing, growing with confidence, and hands clapping in rhythm.  Musical notes on a staff.  Men’s voices, reading.  A videogame sound effect at the push of a button.  Bach, opera.  Speakers, somewhere.  The room, wide and long.  Setting up the room, and then tearing it down.  A singing voice from years ago, coerced, recorded.  Static.  Applause.

I am moved to consider how these sonic r/e/volutions speak to definitions of composition, to reflect on contexts and materials for composition, the how and the why of writing with various tools and technologies, some old, some new.  I’m moved to think about discomfort, glitch, motion, and play as compositional strategies, to realize that product is sometimes the goal, but not always.  Sometimes it’s the feeling, the heart beating fast and nervous, the dancing and the voicing, the reflection throughout and afterwards, the mistakes and the noise.

Crystal VanKooten is an Assistant Professor of Writing and Rhetoric at Oakland University in Rochester, MI, where she teaches courses in first-year composition and new media.