The Politics of Our Intellectual Interfaces: Revisiting the Technological Metaphors We Live and Think With

There’s an update available for your operating system, technorhetors, and Angela Haas said you should download it now. Seriously. 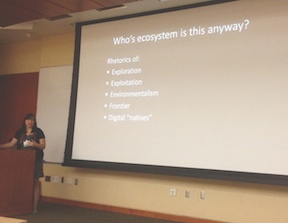 Working from a decolonial methodological framework (Smith, 1999), Hass argues that the metaphors we use to talk about technorhetorics are fraught with violence and supremacy, and we must first refuse those discourses to interrupt the patriarchy and hegemony of digital humanities. Taking a critical approach to the use of ecological metaphors, Haas seeks to build on Haywisher, Selfe, Morashki, and Person’s (2004) work in accumulated and ecological literacies by bringing our attention back to the relationships, living practices, and contexts that are often erased in techno and ecosystemic rhetorics, asking the question, “Whose ecosystem is this anyway?”

By theorizing a social justice approach to ecological literacies, Haas contributes to Selber’s taxonomy of multiliteracies, urging us to become more critical of the discourses of progress and ecological metaphors as we can’t “function” with technology unless we consider how that technology and its discursive constructs position its users. Invoking Powell (2007), she underscores the idea that “access is contextualized and contingent and profoundly more complex when considered in practice” (17) and technorhetors can begin to understand those discursive constructions through a decolonial feminist operating system (DFOS) built on parameters of relationality, locational accountability, and responsibility.

Hass’s DFOS fixes many of the “bugs” in the older ecological operating systems by recoding imperialist and hegemonic rhetorics of:

Exploration Considering how indigenous peoples and places have been victimized through exploration, we should ask who has privilege to explore? Who benefits from exploration? What is impact? What kind of damage is done?

Exploitation Indigenous people’s land has been historically exploited through land grabs; thus, we should ask whose eco-resources are being taken advantage of? Which agents do we privilege?  Whose indigenous ecosystems are we supplanting or ignoring? 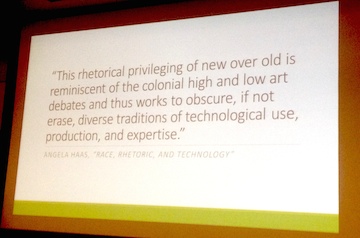 Environmentalism Non-dominant groups are also victims of land dumps and environmental racism. Building on DeVoss’s , McKee’s, and Selfe’s (2009) work with eWaste, we should ask how we are and are not talking about the material violence of technologies. What is the disciplinary landscape of those talking about ecology and how are they grounding discussions in particular environment contexts?

Frontier/ Pioneerism Frontiers have been places of both slavery and mass genocide– of rape, pillaging, and sexual assault, and pioneering is always already an act of violence. When we use these metaphors for talking about digital humanities, we are reifying heteronormativity, ablism, and  whiteness. Here, Hass offers no lines of inquiry, just a poignant directive. Stop it. Now.

Digital Nativism Smacks of agism and invokes the blood quantum laws enacted to measure and divide native people. This metaphor works to create a divide between “us” (those who are techno-savvy) and “them” (those who aren’t), and it forces the question of who’s native and who’s not? Who gets to decide? What kinds of “technology” are privileged and who gets to own technoliteracy?

Hass’s DFOS prompts us to question the common metaphors we use to talk about digital humanities, to consider their impacts on people’s bodies, and to adopt a way of rhetorically performing ecology that foregrounds geographies of bodies and place.

By calling attention to the definite article the in The Digital Humanities, Legg asserted that digital humanities is too often understood as a straight, ablist, white, male, enterprise– one that reasserts euro-centric heteropatriarchy in digital spaces despite its attempts to engage (read= “reach out”) to “others.” Arguing that the field needs to pay more attention to the intersections of race and digitality, Legg shared her understandings of Cherokee cultural storytelling practices and how engaging those practices could reorient digital spaces around indigenous ways of knowing, doing, and being in a networked world. 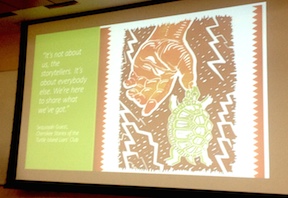 According to Legg, Gagoga, loosely translated as “s/he is lying,” is a Cherokee storytelling rhetoric that operates on the assumption that knowledge-making is a networked project. Legg identifies stories, places, objects, people, animals, technology, nature, etc. as nodes on a cultural web that contribute collectively to communal knowledge production. In other words, knowledge is not owned or passed down in a linear manner; instead, knowledge is a dynamic instantiation of power that is always in flux as community members engage in living practices of the knowing, as opposed to the known. She introduced the term “interpretive motion” as a concept that encompasses the ways that knowledge is embodied and remixed through the  rendering of story in Cherokee oral culture.

Moving into a discussion of storytelling praxis in digital spaces, Legg identified three contexts where multi-sourced stories are interrupting the digital humanities:

The #transformDH tumblr: On this blog, contributors are “doing race, ethnicity, gender, sexuality, and class in digital humanities” through digital activism such as calling attention to missing and murdered indigenous women and communally sharing mobile apps such as Safe Trek where people can quickly and discretely alert friends, family, and authorities when they are in danger.

The What is Digital Humanities?: This website takes a more direct approach at redefining DH by featuring different crowd-sourced definitions each time the web page is loaded. These definitions are randomly selected from past Digital Humanities Day participants and illustrate the multiplicity of voices that are involved, although not always recognized, in DH work.

A Technical Writing Course: Finally, Legg demonstrated examples from her teaching practice, showing how she used a Blackboard social media plug-in called Mixable to engage students in her online technical writing class, working outside of the interface’s “discussion” structures to create a place where students could share and connect as people and not just students, introducing themselves and engaging others through storytelling. 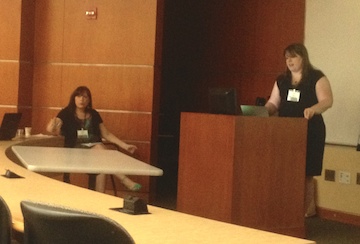 These instantiations of the digital humanities disrupt the colonial thought structures that gave rise to our understanding of native peoples in terms of traditions, artifacts, and preservation (Cushman, 2013). They cool society’s “archive fever” and reposition people, relationships, and cultural practices as centerpieces of digitality. Each of these participatory spaces, she asserts, IS the digital humanities– living practices that decenter and decolonialize digital spaces.

Stephanie West-Puckett is a digital rhetorician, compositionist, and activist scholar– engaging digital writing, new media, critical web literacies, and professional communication in K12, university, and community learning environments. She is a faculty member in the English Department and a doctoral student in the Writing, Rhetoric, and Professional Communication program at East Carolina University.

Steph West-Puckett is an assistant professor of Writing and Rhetoric at the University of Rhode Island where she directs the First Year Writing Program. She researches and develops writing curriculum and assessment practices to promotes equity, access, and diversity in classroom and community literacy settings.