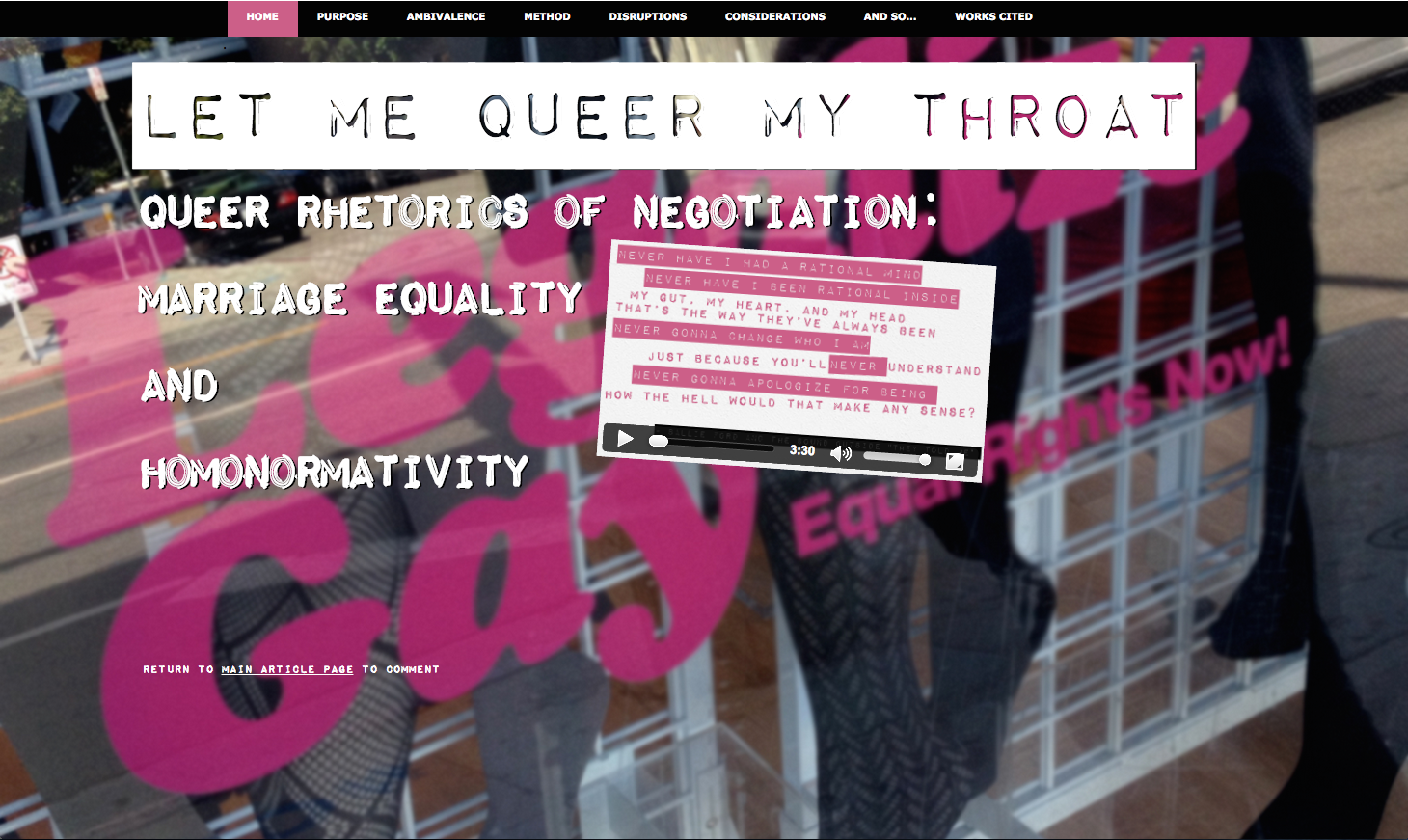 A common critique of (digital) multimodal scholarship revolves around the recognition that many of the webtexts published in online journals, rather than exploring the ways that diverse media allow for alternative knowledge-making practices, do little more than remediate traditional print epistemologies. Think, for instance, of the “webtext” that is primarily text, or that only very marginally includes forms of new media, without any indication of an understanding of how those forms contribute to the piece’s meaning.

I have some sympathy for these types of arguments. If we’re not going to consider, in depth, the implications for multimodal scholarship, why do it all?

It is with deeper appreciation and enthusiasm, then, that I introduce Hillery Glasby’s “Let Me Queer My Throat: Queer Rhetorics of Negotiation: Marriage Equality and Homonormativity” – a webtext that not only contributes significantly to our understanding of the complex politics involved when discourses of queer rhetorics and marriage equality come into contact, but does so through a deliberate and thoughtful application of multimodal design.

Glasby’s webtext weaves the personal, theoretical, and academic together in ways that mimic and enact the day-to-day contradictions and ambivalences of the queer subject, a subject consistently faced with multiple and rival identity narratives. Rather than try to reconcile such multiplicities, Glasby embraces them in both the (anti)argument of the text and in its use of multiple media and (dis)organized form. The central tension here is Glasby’s admission of her own conflicted feelings, as a self-identified queer, regarding same-sex marriage. “Ambivalence,” Glasby tells us, “is the best word to describe my current state. Reading radical queer critiques of same-sex marriage and getting engaged in the same week has me confused” (“Ambivalence”).  Coming from a queer perspective which resists the homonormative function of same-sex marriage as an assimilationist act that normalizes queer while eroding its subversive potential, Glasby is suspicious of the recent gains in marriage equality and of the institution itself. On the other hand, she is emotionally drawn to the multiple, optimistic narratives of marriage equality she encounters in the media and in everyday life, narratives that celebrate the potenial of same-sex marriage for social justice.

It is in this conflicted and ambivalent space that “Let Me Queer My Throat” gains agency and subversive rhetorical potential. Glasby not only refuses to come to an easy reconciliation of the multiple tensions she faces, she presents a mode of writing that sees value in the gaps and contradictions, that eschews linearity in favor of new modes of meaning-making. Glasby explains,

I employ alternative rhetorical strategies as a vehicle to navigate the vast wastelands of my multiple subjectivities. Rather than confidently moving forward with a clear, linear argument in mind, I am instead inspired by Eve Kosofsky Sedgwick’s question: “what if instead there were a practice of valuing the ways in which meanings and institutions can be at loose ends with each other? What if the richest junctures weren’t the only ones where everything means the same thing” (Sedgwick 6-7). This project is my investigation of those loose ends. (“Purpose”)

And those loose ends are especially visible in the composition of the webtext, both in terms of its organizational design and inclusion of multiple media.

Glasby’s narrative structure evokes a rhizomatic design, one attuned to and apprehensive of the multiplicities that emerge among conflicting discourses of identity rhetorics, and that recognizes the possibility of non-closure in academic writing: the idea that we might remain in the contested space longer, rather than quickly, neatly, and (perhaps falsely) resolving it. In the menu bar above, for example, Glasby sets up multiple sections and subsections, “loose ends” that both rub up against each other and provide multiple routes/roots into the the life of the text. These navigation options refuse to proscribe a specific, linear reading path, offering instead a number of entry and exit points. In doing this, Glasby helps us, the readers, to feel what it is like to be “stuck” in those spaces of contradiction that she herself is trying to work through in both her academic and personal life.

In addition to the multiple, textual selves/subjectivities offered up, “Let Me Queer My Throat” also features a rich diversity of media, further enacting a queer, alternative rhetoric that mixes and remixes a plurality of symbolic traces. The Sallie Ford and the Sound Outside music video featured on the webtext’s cover page, the Fuckh8 meme, the art and photography, and the personal audio essays composed by Glasby herself that are sprinkled throughout the text: all work together to compose and evoke multiplicity.

What does it mean to be a subject among these symbolic traces, through which these symbolic traces flow and crash into one another? Furthermore, how does the individual subject answer these competing narratives? Glasby’s ultimate theoretical advocation involves an acknowledgment of the validity of opposing narratives. The subversive potential of queer  criticality plus an appreciation of the marriage equality movement provides new possibilities for the ongoing interrogation of the institution:

In taking the time to deliberately and thoughtfully compose, and I italicize that word to give it more weight, Glasby shows us the fullness of what multimodal design can offer. Something more than the addition of images, videos, and sounds to our alphabetic texts. This type of multimodality allows for a critique of traditional academic epistemologies, and when combined with a queer rhetoric, models alternative ways of knowing and being that value rather than efface the personal.