After I graduated with a BA in English in 2005, I decided to take one year “off” to be an English teacher in China. That one year off stretched into four years, and over that time I developed a fascination with the hybrid forms of Chinese and English expressions, frequently referred to as Chinglish. When I lived in China, I would demonstrate the potential confusion in translation with my students. For example, when my students almost dropped something or slipped I would tell them “Small heart!” as a literal translation of 小心! (xiao xin! Be Careful!). Invariably, it took them a few seconds to figure out what I was saying, and that moment of uncertainty was, for me, dragged out into four years of living as a foreigner (老外 lao wai [white]foreigner), experiencing a new-to-me culture, and attempting both to learn Chinese and teach English in China.

I returned to the States in 2009, and in 2013 I returned to teaching as a graduate teaching assistant. Because of my experience living abroad and a personal interest in utopian studies, I am extra sensitive about my students’ possible feelings of alienation in the FYC classroom. They are from different cities, states, and countries; they range from psychology to engineering to nursing to undeclared majors; they vary in reading and writing abilities; my classroom, then, becomes a utopian space, a space in which various experiences and outlooks come together as one class. To facilitate this utopian project, I use peer reviews frequently in order to ensure that my students interact with all of their classmates. One of my favorite peer review activities requires my students to present their research in front of the class and answer questions about their project as a way to anticipate their readers’ responses to their text. For ELL students, however, this has often presented a larger challenge: conveying their ideas past any existing language barriers.

Wang, one of my ELL students in the spring 2013 semester, succeeded in this arena by choosing a paper topic comparing and contrasting American and Chinese zombies. The course has a monsters theme, and rather than speak to a Western genre with which he only had passing familiarity, Wang chose to present the Chinese zombie to American students. At the beginning of his presentation, his classmates were trying to understand his points as he presented them orally, and his first tool to promote understanding was a PowerPoint presentation.

He opened with the slide depicted in the image below: 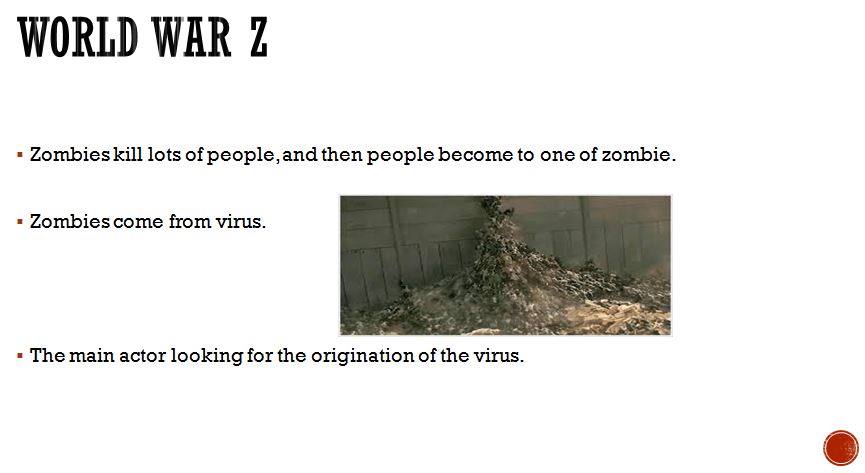 Wang discussed briefly how World War Z focuses on the Western notion that such a plague would be biological and that a human, through simple reason and research, can find an end to the plague. Many students were familiar with this movie, and seemed to understand his point. Sure, there are grammar and syntax issues with the slide, but it began bridging a gap. Any issues with Wang’s pronunciation could be mediated by reading the text on the slide. The pictures also helped provide a visual cue for his topic.

But how does a Chinese student in America explain Jiang Shi, the hopping reanimated corpse that can be translated either “vampire” or “zombie”? Apparently, if you tell a room of mostly freshmen American students that Chinese zombies hop around with their arms stretched straight out, the mental image tends to be humorous; if you can show them a cultural artifact, however, suddenly the humor blends with or succumbs to a new type of horror.

At this point, with a static visual and printed words projected in front of them, the other students were getting a better view of the Jiang Shi as a distinct idea. They are not biological wonders, but mystical creatures conjured by Taoist masters. The Taoist master uses these corpses for selfish and unjust purposes (apparently Confucius may have been right not to trust Lao Zi!), and other mystical figures must find ways to stop them.

In an attempt to begin a rudimentary synthesis, Wang presented a synthesis slide (depicted below), where he linked out  and showed parts of  a classic Jiang Shi movie.

Wang’s approach to his project was to take a standard American zombie film and set it next to a classic Chinese Jiang Shi movie to discuss how these movies address specific, material differences between the two cultures. With only his written or spoken words, Wang could only give an unclear version of his project, but when he was able to use a multi-media presentation he was able to give his classmates a vividly clear understanding of his argument.

After presenting on his topic, his classmates had more questions for him than they had for any other presentation. Some might think this an inconsequential or circumstantial evidence of the efficacy of Wang’s ability to communicate off of paper, but this class had a student arguing for a vampire lifestyle and another student equivocating “bully” and “monster,” both of whom faced a grueling 10 minute question session from interested peers. Wang’s presentation marked a moment of difference, though. Where many native English speaking students had been reluctant to seek out an ELL peer for peer review, Wang was in great demand after this presentation. His ideas were no different in the presentation than they were on the draft of his research paper, but having recourse to express himself through a clear cultural artifact such as Mr. Zombie allowed his ideas to be received and accepted in a new way.

After seeing how this multimedia element enhanced Wang’s project, I have been trying to find ways to allow students to incorporate video clips or other media as meaningful parts of their argumentative writing assignments. One possible way is to modify what is currently the final Google site portfolio into the space in which they compose their papers throughout the semester. Instead of being the equivalent of a hard-copy folder turned in on the last day, I hope to explore the ways that composing through Google sites may enhance how my students are able to formulate and demonstrate their arguments.

I am a GTA at Georgia State University pursuing a Ph.D. in rhetoric and composition while teaching FYC courses. I am passionately pursuing the Horizon, wondering in what ways the composition classroom can be a utopian space.