As the students’ anticipation for this project came to a boiling point, we started off on a journey that took them through a multimodal world that they had not seen yet….Well, it wasn’t that poetic, but most of the students were excited to start the last project of the semester and finally play with Prezi, which they had seen throughout the semester. The goal for this paper was to take an analytic view on the music artist they chose through research they performed (interview, scholarly sources, and non-scholarly sources). First, we had to work on the structure/ideas for the paper. So, they worked in pairs on filling in a table that asked them to put in and match evidence from the interview (what and how the artist was talking about) with research they performed (scholarly and non-scholarly). The last column of the table asked them to describe the relationship between the evidence from the interview and their research.

As I was walking around and talking to them, that last column seemed to be the hardest part for them to accomplish. I think that it partially comes from the fact that depending on what pieces of evidence they matched up, the connections could have been very different.  However, the majority of them generated at least five examples of evidence matched to research. 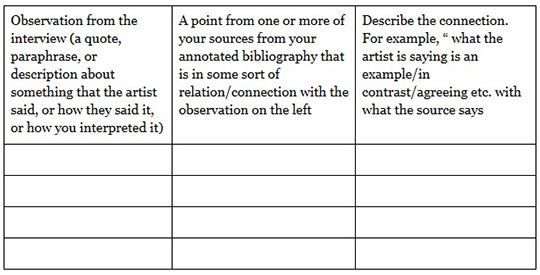 When we resumed next time, we started off with a five-minute free-write about the artist and topic they chose. Once time was up, I asked them to read what they had written and highlight/point out some of important words and phrases in their passages. We brought it to class to hear a few examples and propose how they can generate some ideas for a potential thesis. That part came out in some cases very successful, and they were able to come up with an idea that turned into a strong analytical thesis. However, a lot of times the keywords went back to facts that they were remembering from their research on the topic and didn’t really go beyond an observation. For most of them though, it provided at least a few qualifying words that I encouraged them to use in the process of generating a thesis.

So, you might be wondering, what about Prezi? Well, I had them watch three Prezis, and note down at least three things they liked about them. When we resumed, I gave them a few minutes to pull up the Prezis, and go over the things they liked and also didn’t like in small groups. We pulled up on the projector the first Prezi. That Prezi was not a very successful one, and two of my three sections could not really point to anything positive except for the title page looking good. However, my third section pointed out that they liked the transitions and the pictures in it.

At first I was surprised at such a different reaction to this Prezi, and when I asked them for more things that they liked about it, a lot of them agreed that it was good because it was short and to the point. Well, it was short (only 13 slides, as oppose to the 55 and 57 in the other ones), but the main reason that it was short was because the text was not divided into small sections that can be easily read in this format. So, there were only a few slides with text (hundreds of words) and a few pictures.  I pulled up one of those slides full of text and asked them if anybody had read this slide. They all said “No.” I showed them a series of pictures that were put in the Prezi and asked them if they knew what the purpose and role of those pictures were; they said they didn’t know. My suspicion is that this vast difference does not come from the inherently different way of looking at a Prezi, but more from their performance on the homework assignment. This discrepancy made me think about how people look at Prezi. Sure, we want to be able to be entertained (so we don’t put too much on a slide, and we provide “fun” stuff), but it seems that maybe we also don’t want to click too many times or have too few slides.

How do you make these two things – audience engagement and organization – go together though? Well, that is a question to ponder in preparation for next semester. In the end, the students did point out the qualities of Prezi that will be important in their own creations, such as amount of text, colors, fonts, background and other images, and videos. As we were going through all of the Prezis, I was writing the good and the bad about Prezis on the board, and once again emphasized what will be important in creating a good quality Prezi. I think that they became a lot more conscious of their own process creating their Prezi because they had to be explicit about what is good and what they need to avoid.