This week was focused equally between Prezi exercises and peer reviews of paper drafts.  So far, my approach is to allow them to compose the paper in a document first and then put the text into Prezi. However, there is still a question in my head whether this is the approach that I will keep in the future. Any suggestions? In the first class of the week, I did a tutorial on Prezi. We were in a computer lab, so they signed up for Prezi, and I showed them the functionality of it. All groups were equally excited to play with Prezi. That tutorial took about 20-25 minutes. After that, we did an exercise with Prezi. I asked them to use a piece of text that I gave them (about 500 words in the shape of two paragraphs). I divided them up into pairs and told them to choose a template or choose a blank Prezi, put the text in it, chop it up, and add a path to it. As they were working on it, I was walking around and giving advice, asking questions, and answering questions. I asked them to show their examples and walk us through the choices that they made. Most of the reasoning for chopping the text was dictated by the sentence boundaries. Some groups used the text and made it their own. For example, they changed a full sentence listing the story titles that the author was talking about to bullet points. Students reviewing other examples were very honest with comments about too much text on the slides and praises about the changes in the text. Since they had to add a path, they also commented on the successful and not so successful transitions. There were a lot of comments about how easy Prezi is and how intuitive it is. We finished off with talking about Draft 1, which they had to do for next time.

During the next two classes, we divided the period between working on the draft and Prezi. So, in small groups, they had to add some images to the existing practice Prezi. Once they were done, I asked for a few to show to the class. Most of them chose very concrete images (text talking about an author, author’s image, text listing short stories, cover art for the short stories), and they worked fine. But there was one abstract image that worked very well. The text was talking about a married couple being in love, and the group put an image of wedding rings into their Prezi. Once again, they were commenting on the ease of putting the images in and how much better it made the Prezi look. 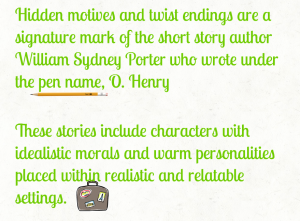 When it comes to Draft 1, we did an exercise on the thesis. For next time, they had to write up Draft 2. The last day of the week, we first did a Prezi exercise in which I asked them to add some shapes and videos, and to go outrageous on the transitions. So, as usual I asked them to show their examples. This time around they chose some good shapes, for example a suitcase for the setting of the stories, book for a short story and putting the text on it about one of the short stories, or a little pen when they talked about the author’s pen name. They commented when their peers used too many twists and turns and seemed to be very cautious not to overdo the movement of the elements.Throughout this week the students got to “play” with Prezi and experiment with its features. At the same time, they began to explore their paper ideas through the way they will be presenting them on a Prezi canvas.