We began the week with the last peer review on a draft written in a word document. This one was rather extensive to make sure that there was a thesis, evidence, and explanations, so it took most of the class. However, at the end we talked about the crucial role of the template that they choose. We talked about the visual metaphors that they are able to create through their choice of the templates, and how that can and should reinforce what the main point of their paper is. This way, they got some ideas for their homework, which was to put their text into Prezi, chop it up, and add a path to it.

When we came back, we did a peer review on the Prezi for the first time.We used the peer review questions on paper and played “musical chairs” in groups, so they could watch and peer review others’ Prezis. The first peer review was still connected closely to the content, but also commenting on the crucial features of the text in Prezi. During the process, they  commented on how many different ideas they were getting from looking at the Prezis their peers created. As I was checking in with them, the majority of them were well on track, and those who were behind had a chance to ask me questions and get back on track. 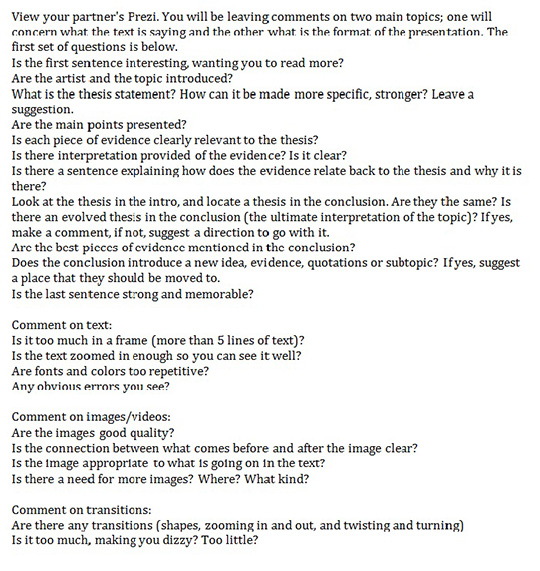 On the last day of the week we did another peer review on the Prezi, this time around mostly focused on formatting of the text, images, and videos. I put them into bigger groups of five, so they would see more Prezis. While they were working, I spent a few minutes one-on-one talking to each of them about their thesis statements, main evidence, and research. This week was all about peeking into ideas about Prezi and exploring their own ideas for organizing their papers.