Multilingual Wordle from Students’ Projects in a Study Abroad Program

My post will reflect on multimodal composition outside of a FYC classroom, in a senior-level study abroad course sequence that features multilingual research. The educational and institutional context for this case study is a Global Studies minor that involves cross-cultural immersion experience (study abroad), language study, and global content courses. On their study abroad course sequence, students first take an online class while they are away on a semester abroad, and upon return, enroll in a Capstone seminar in which they work on a multimodal cross-cultural research project.

It was not until after a couple of semesters of teaching the study abroad sequence that I realized that, in fact, what I am teaching is multimodal and multilingual composition. This realization came with a number of other exciting insights about the multiplicity of disciplinary and pedagogical layers involved in my work with Global Studies students. Spanning different media of expression, various research methods–from statistical analysis to ethnographic observation to qualitative text and visual analysis (to name but a few)–the work that students in GLST do foregrounds writing and thinking at the crossroads of contexts.

My most important conclusion that comes from teaching this course is a growing certainty that multimodal and multilingual writing naturally, logically co-exist, especially in research-based composition. When performing multilingual research, students most often reach out beyond the single modality of text to include various modes and media as objects of research: titles and captions in different languages, memes, instructive signs with illustrations, car license number plates, street and place names, advertisement slogans along with images and soundtrack, etc. These are usually included in the Capstone project itself, therefore allowing students to write “with” as well as write “about”: writing with sound, images, and inclusion of multilingual items such as quotes, diagrams with statistics, images of signs in different languages, etc. For example, one project analyzed the viewer’s gaze and performativity in a photographic portfolio of street performers in Leipzig, and included such multimodal/ multilingual elements as photos, a video clip, and excerpts from a tourist brochure in German. Another explored the visual exploitation of the female body on Italian television in relation to the political and socio-cultural discourse on gender within the country. Yet another looked at cultural conventions of getting a point across in social service announcements and road signs in Europe and New Zealand. All of these examples employ visual and discourse analysis and focus on culturally-specific rhetorical strategies of persuasion and argumentation. In other words, multimodality and multilingual writing comprise both the form and content of composition. 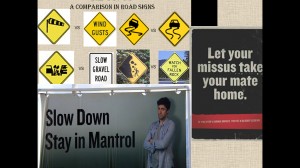 Multimodality (a term close to, but different from, multimedia) foregrounds perception; likewise, cross-lingual research revolves around culturally-determined differences in perception and judgment. Recent studies of the connection between culture and sensory perception open up rich possibilities for imagining alternative ways of knowing through activating more modalities of language and sensory stimulation. As they navigate between alternate subject positions encountered in their research and learn to appreciate culturally-different perception of the same issue, students develop critical thinking skills. This happens through interrelated processes of alienation and immersion: alienation from single-modality, monolingual discourse with its underlying monocultural perspective; immersion into alternative ways of knowledge and expression. The study abroad environment facilitates what I believe to be ideal conditions for broadening students’ cognitive agency. In their multimodal projects, students mirror the sensory re-engagement with reality that they experience as they see, hear, smell, and think in new ways throughout their study abroad. The world is a text written in many languages and multiple formats. As they get acquainted with the new culture, they recognize differences in the way various cultures categorize and engage with fragments of reality, from everyday and seemingly insignificant moments such as culturally-determined perception of time, etiquette, personal space, etc, to more overtly political issues, such as social hierarchy, national identity, and cultural othering.

This experience inevitably translates into a more complex and reflexive way of writing. On the level of form, students recognize and practice their power to employ visual and interactive rhetoric together with more conventional media of expression. On the level of verbal text, multimodal/ translingual composition often manifests itself through code-switching, creative experimentation with linearity of narration, and shifting between different cultural conventions of structuring an argument that scholars of critical contrastive rhetoric are familiar with. Ultimately, composition at the crossroads of formats and cultural contexts foregrounds metacognition, shifting the focus from “making a point” to discovering a point, from expression to creation of meaning. The thinking that happens is inductive rather than deductive, prompted by honest experiential discovery that often overthrows habitual stereotypes and dominant ideas.

I imagine this post to enter a broader discourse on defining interdisciplinary connections and productive collaborations between different components of writing at the crossroads. I believe that questions and possibilities raised by multimodal/ multilingual composition are relevant to conversations in writing across the disciplines, multimodal pedagogies, L2 education, multilingualism in education, internationalization of the curriculum, and possibly many more areas of academic and pedagogical inquiry, almost all of which are isolated from one another. Internationalization of the curriculum is especially left out of many disciplinary conversations, exactly because it is not rooted in any single discipline; therefore it is most often addressed from the administrative, rather than pedagogical, perspective. Meanwhile, there are exciting pedagogic discoveries being made in the field, as well as productive challenges relevant for academics across the disciplines.

Natalia Andrievskikh is Instructor of Global Studies and a PhD Candidate at the Department of Comparative Literature, Binghamton University.